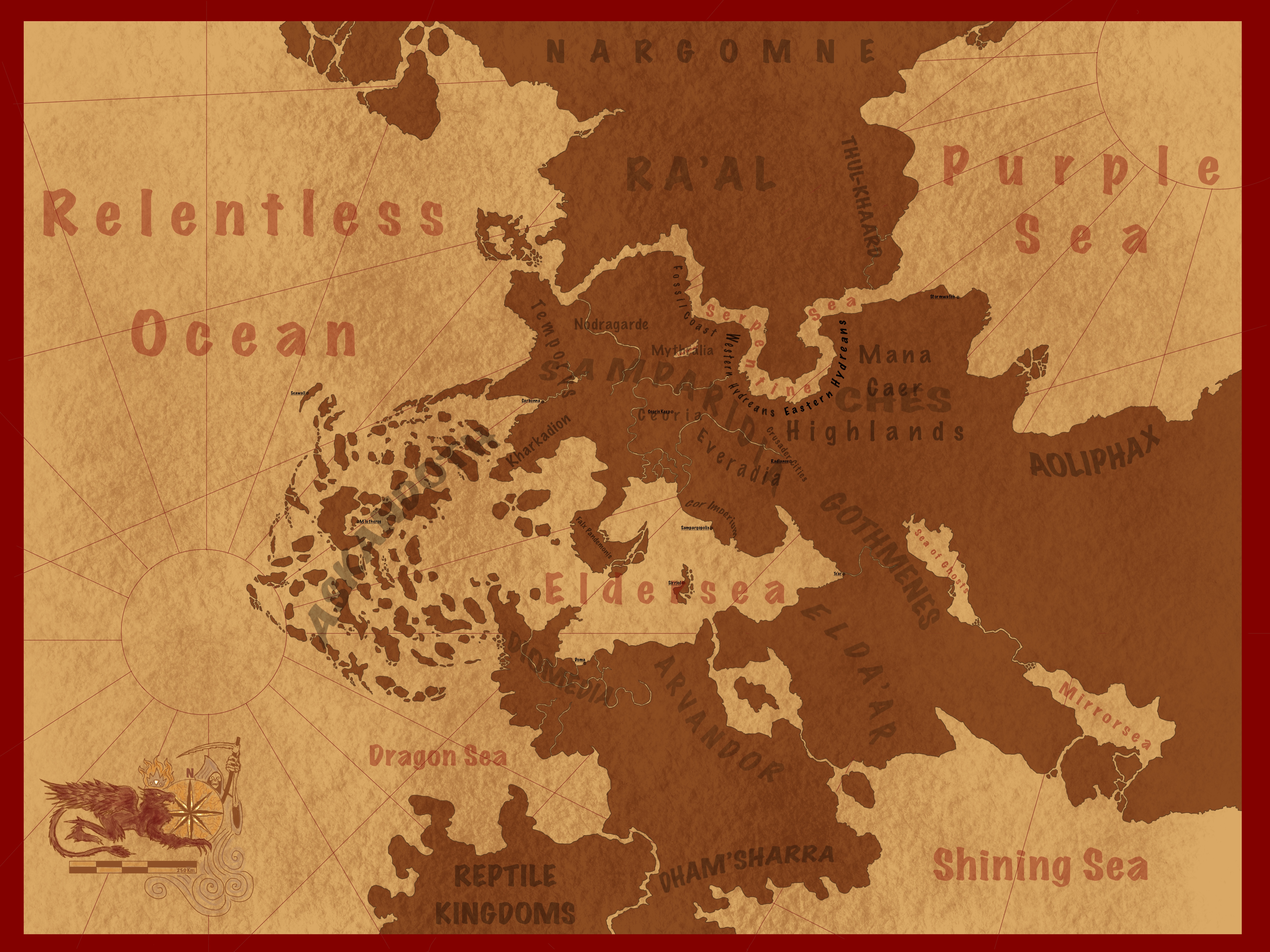 This is my homebrew campaign which I’ve been working on since 1999 . It started as a dark and weird fantasy setting centered on Samparidia, a meta-Byzantine empire analogue, and it is still expanding with the rest of Chronisinia.

The illustrations are done by me.

The Bygone
Samparidia was the last great empire of man, ruling most of the known world in relative peace with unmatched military force for two thousand years. Now, the golden age of Samparidia is long gone, her old glory is a dreamy melancholia. The land is shattered, Vassal Kingdoms and far Provinces are declaring independence, shaping new nations. In addition, the arts, culture and technology is in the decline; sages and seers alike foresee the approach of a barbaric dark age for mankind.

The Exodus
In times forgotten, a warrior clan of humans arrived to Chronisinia from West in great numbers, crossing the enigmatic Black Curtain and sailing The Relentless Ocean in titanic ships called Arks. They knew themselves as Ardaccs then. The reason of the exodus and the lands beyond the Black Curtain are forgotten, mentioned partially in cryptic sagas, folk songs and myths. Ardaccs were great warriors, and conquered the lands they had disembarked in a whirlwind of iron and blood. In the following centuries they built a glorious empire, Samparidia, and ruled the known world for millennia.

The Ancient
The world of Chronisinia is immemorially old, it was ancient when the Ardaccs crossed the Black Curtain. Countless empires rose over the ruins of dead civilizations, their names forgotten. An observant mind can deduce that in the past, more advanced and civilized people roamed these lands. The remnants of their culture and technology can be found in most unexpected places. And most of the time the purpose of these artifacts are mysterious or outright incomprehensible.

The Weird
Chronisinia is filled with all kinds of phenomena which appear strange and incomprehensible to common folk. Some of them are mysteries of lost ages, others are nature of the land.

The Evil
Ardaccs were orthodox in their monothestic faith of One God when they began their conquest of the new realm, but the Chronisinia always had gods of her own. These Old Gods are Lovecraftian beings of evil incarnate, and old texts called them The Primordials. Some are believed to exist in the world physically, assumed to be sleeping and dreaming. They still affect the world in their dreams. Their wake will be doom of this world.

This campaign (Samparidia) was first created in 2001 by Will’o’wisp. After all these years, it’s nice to that it still evolves. As a player and DM, this one is my favorite so fa among other non-commercial campaigns and very nice to see it here back in the digital world. (Some parts of the very early versions of this campaign were hosted as a website between 2001-2004, by me)
If you spend some time reading the setting, you may realize that lands of Samparidia and Ra’al (in their core only) has some resemblance with the Dragon Age computer game titles. As this campaign was created back in 2001, far before the dragonage lore, I can easily claim that this is just a mere coincidence. Nevertheless, only a small portion looks similar and the concepts created here are more evolved than the dragon age ones, when compared. As a player who literally tested the very early versions of this campaign, its fascinating to see how it evolved and did brew in to something else in time. Welcome back willo! keep up the good work.

I'm sorry, but we no longer support this web browser. Please upgrade your browser or install Chrome or Firefox to enjoy the full functionality of this site.